So much to do.. First on the agenda is landscaping. The driveway hasn’t been done as of yet, which was totally our decision. We wanted to widen the sideway between the neighbours garage & our garage for better access, so a retaining wall was required.

Also wanted to level out most of the back yard so a second retaining wall was required.

We have 2 Beagles so we need to put fences up ASAP as I don’t think mum would want them for several weeks. Thanks to Andrew at 3D Retaining Walls, job was done in a couple of days. Now we can get the driveway laid & the back fence done.
Posted by Michael, Lorelle, Tyler & Teaghan at 9:46 PM 47 comments:

Family Room from the other side...

Kitchen from the other side...

Ok… It’s been long enough. I think it’s about time I updated this blog thing.

Lets see, where do I start… Well firstly we’ve moved in YAAAAAY! 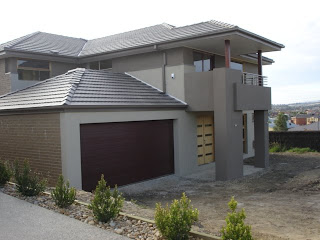 We did our walk through inspection on the 21st of March with our Site Supervisor & his boss. By the time we had finished we have come up with a 4 ½ pg list of about 50 + items, mostly minor things from paintwork, plastering, scuffs & scratches etc. There were a few major issues from a dent in the laundry sink, that someone attempted to panel beat to the best of their ability, still stood out like a sore thumb. Also 4 large scratches in the timber laminate flooring in the family room, no doubt from a tradie dragging something that was too heavy to lift which left behind 4 train track like scratches. A couple of power points missing from where they should be… & the list goes on. Nothing too hard to attend to though.

They gave us a week to fix all these issues… keeping in mind it was the Easter w/end in there as well. SS rang me the following day & said all issues won’t be sorted until the following week & handover won’t be done unless everything finished… NO DEAL!!

We had sold our place back in December & settlement was supposed to be 29th Feb (as this was the date roughly we were told the house would be finished by). Because it went beyond this date we had 2 options… One was to move out & stay at mums for a month & keep everything in storage, then move it all again once the house was done, or we could rent our place until we could move in. We went with the latter option. There was no way I was moving everything TWICE! We paid 3 weeks in rent to the buyer & were ready to move in after that.

So we obviously didn’t want to pay anymore rent & they did tell us we’d be in by a certain date so we pushed them to move in on the 28th. They agreed providing the tradies could come back once we’re in & fix any unresolved issues. No Problems!

Did I tell you how much I hated moving. At least we had ½ of Friday & the rest of the w/end to do it. Went & picked up the keys from head office, signed the papers, received a nice complimentary bottle of red & a BBQ set then off we went to move. Had plenty of help (& offers), thankfully, as there was no way we would of got it done in the time we had.
Posted by Michael, Lorelle, Tyler & Teaghan at 11:52 PM 1 comment:

Plasterers have been... Part III

Went to the house on Sunday & not much had happened in the last week & a ½. In fact nothing that I could physically see. Went passed again Tuesday night, not expecting too much to have happened since the w/end... Well I was wrong.
Plasterers have been through in the last couple of days & patched & filled the whole house. Not only that, the cabinet makers have been busy too. Most of the kitchen has been installed, minus benchtops, & appliances & 1 sink, which is in the corner of the pantry in the pic. Looks like the cleaners are doing some overtime in the 2nd pic. Only took a minute for the nicely swept up pile of rubbish to be spread all over the floor. This will be the only time when the kids make a mess on the floor that we won't have to clean it up. I quite like the retro patch work on the plaster too. Shame to paint over it. 3rd pic is of the powder room sink & bench top & the 4th is of the laundry cupbourds & top. 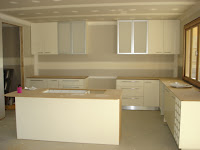 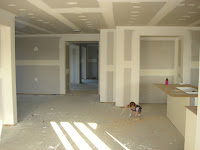 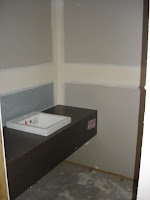 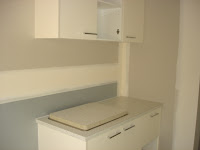 Plasterers have been... Part II

It took a few days between upstairs & down in putting the plaster up but all of the house has now been plastered. So too late now if we forgot anything like extra wiring or noggins etc.. Think we thought of everything... maybe.

More pics of downstairs with the plater in. The 1st looking through the rumpus / theatre room to our backyard & our view. Those trees are getting bigger along the nature strip & blocking a bit of the view... Maybe reqires some special meddy to help them sleep better if you know what I mean... Shhh. The 2nd is the kitchen, or at least where it will be (see following post), walk in pantry on the left, island bench in the middle, where the pipes are & byfold servery doors on the right going to the alfresco. The 3rd is looking from the back of the house through to the front door. Looking a lot smaller now with walls. & the 4th is the formal lounge. You can see the wall we knocked out to convert lounge / study into one big lounge room. The computer will be set up in the 4th bedroom so really no need for a dedicated study room. 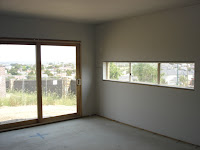 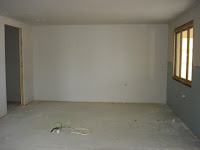 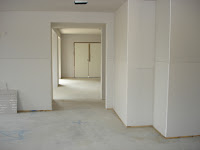 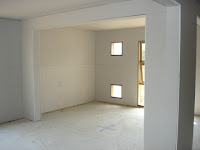 Well as I mentioned in the last post, the plasterers have been & done the upstairs ½ of the house. They definately don't mess around once they're in there. It's amazing the difference it makes to the place with plaster over the frame, being able to see all the rooms come together, taking shape.

Took these pics on the 20th of last month (been slack posting them, sorry) at 9:00 at night so it's a little dark up there, haven't come out too bad though.

The first is from the master b/r looking at the TV area & the 1st bedroom. The second is in the reverse, looking from the TV area back to the master b/r & where the stairs will go on the RH side. The spa bath has been installed in the bathroom in the 3rd pic. The 4th is the tiny window above the double shower recess in the ensuite. The 5th is the plaster delivered ready to be fitted in downstairs. 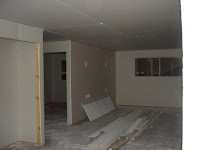 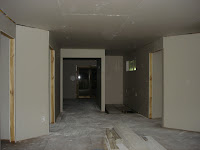 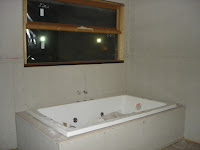 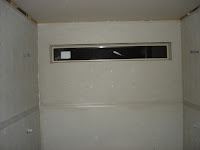 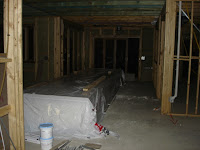 Been a while since the last post, & plenty has happened since.

Firstly all the brickwork (excluding garage) has been finished off, & that is one hell of a lot of bricks!! So all of the scaffolding has come down. Once the render goes up it will break up the overwhelming look of a “brick fortess” 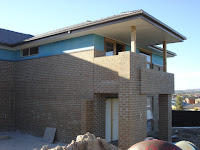 Went passed on Tuesday night after work (& lucky I did) as the electrician had been & done all the wiring for the whole house! There was someone there at the time installing the alarm & vacuum. Told him who I was & he said that the electrician had been waiting for a call from me as to where to locate the telecom points before the plaster goes in. I said “When’s the plaster going in?” He said “Friday”… After a few seconds of silence & shock… & several phone calls, I got onto him & we worked it out. Went passed last night & sure enough, all points in the right spots. 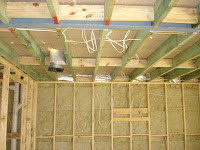 We were told initially that a letter will be sent out by the builder with the details of the electrician & for us to contact him for the location of all the telephone points. That was fine, & we did receive the letter… the Friday before! That gave us basically the w/end to organise it. Thought that maybe a little longer than 4 days would have been nice. Might have got lost in the mail.
Also had to organise my guy to come out & do the wiring for the HT room… Speakers / Foxtel / extra aerial point etc… With a little persuasion of his favourite drop of bourbon, managed to get him out the following day to do it all… One less thing to take care of. 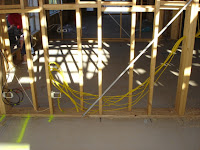 Other than the wiring, the evaporating cooling unit has been installed on the roof along with all the ducts for that & the heating. A big pile of insulation was delivered on the Tuesday & was all installed the following visit on the Wednesday. Still a pile of it for the upstairs area to be done. Should be in by now. Also the little windows that were in the previous post have been installed… Don’t they look cute! Piping for the ducted vacuum all in & alarm pre-wiring done as well. Brickies have been back & started on the garage (½ of one wall finished) & frame for the rear access door in. 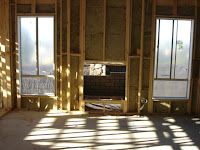 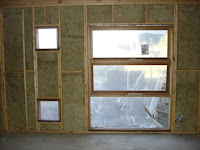 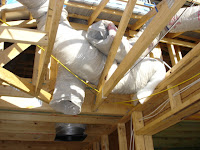 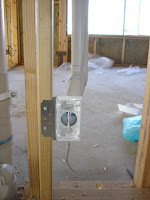 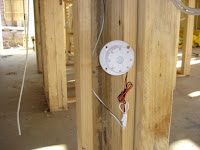 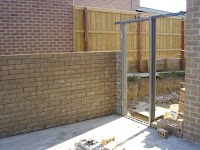 As you can see, the temporary front doors have been put in, which means one thing… “Lock-up”… hence another payment installation from the builder required (10%). 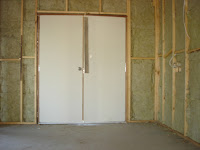 Only spoken to our site supervisor once, over the phone, the whole time of the process… Today is his last day with Carlisle Homes, which might have something to do with the lack of comms with him. Hopefully we can get a little more out of the new supervisor. I have faith! One of the main reasons for contact in our circumstances is a Completion Date. I know they can’t give us an exact date, but just a rough time (maybe what month) is all we would like to know. We will be putting our existing house on the market ASAP, but without a handover date of the new house, it’s a little difficult to work out a settlement period.

Overall, very happy with their progress.. You never know, might be in earlier than expected. Fingers crossed!
Posted by Michael, Lorelle, Tyler & Teaghan at 8:35 PM 2 comments: 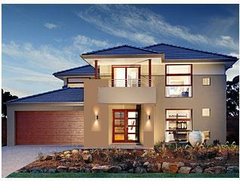 Hi All! This Blog is just for everyone to see our trip from start to finish. We are building the two storey Bordeaux 40 from Carlisle Homes (see pic above) in the Chase estate in Berwick. We built our first home 13 years ago & the four of us (Me, Wife & 2 kids under 4) have grown out of our little place & need to upsize soon! Take a look at our journey along the way & please feel free to add any comments (negative or positive) / ideas etc...